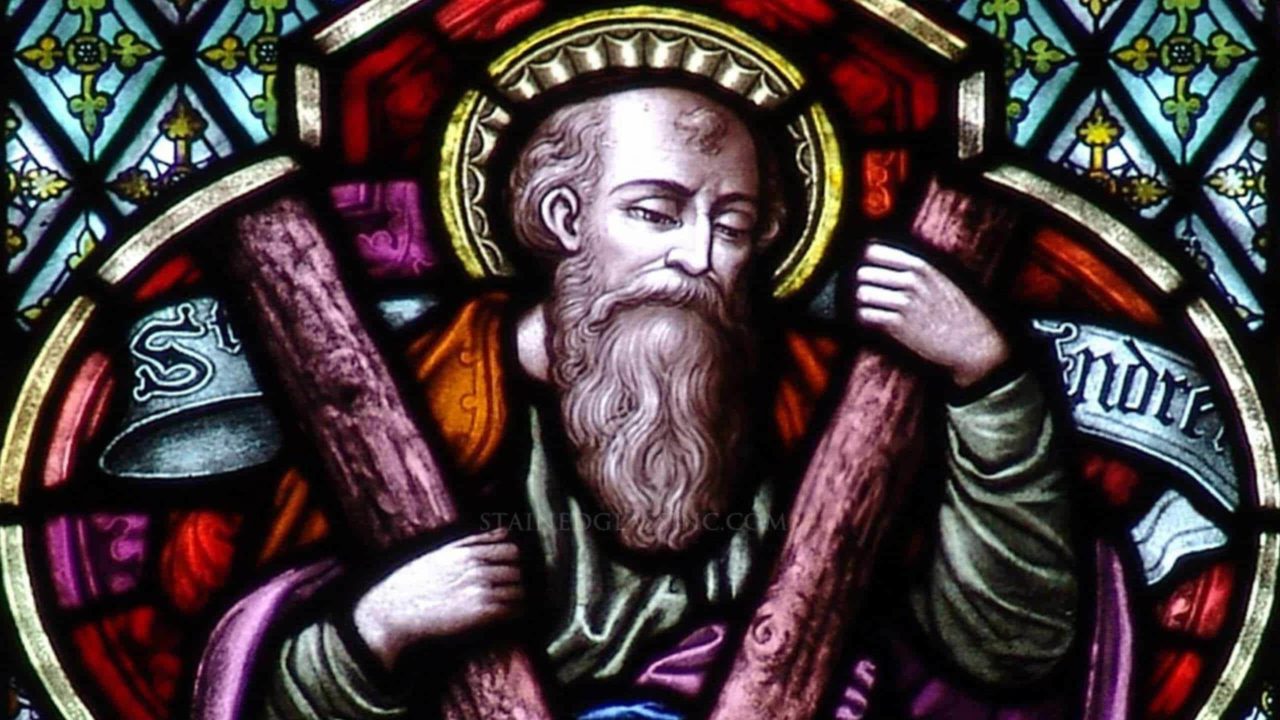 ALMIGHTY God, who didst give such grace unto thy holy Apostle Saint Andrew, that he readily obeyed the calling of thy Son Jesus Christ, and followed him without delay; Grant unto us all, that we, being called by thy holy Word, may forthwith give up ourselves obediently to fulfil thy holy commandments; through the same Jesus Christ our Lord. Amen.

As we draw closer to Thanksgiving, our minds turn towards the holidays and all the necessary activities to prepare for the season. Excitement returns and we know that Advent and Christmas will shortly be upon us. In the season of Advent, God calls us to prepare for the Lord’s second coming as we remember and celebrate his first appearance on Christmas Day. Advent is special because it marks the beginning of the new Christian year where we walk again with Jesus through his life. The very first last feast day on the Church Calendar for the year could also count as the very first day. The Church celebrates the feast of St. Andrew, the very first disciple. He becomes our Advent example because he prepared for the Lord Jesus’ first coming with such diligence that he was able to recognize Jesus as the promised Messiah when He passed by.

The account from St. Matthew’s Gospel tells us that after Jesus’ temptation in the wilderness, he began to call his disciples. The first ones, as you could expect, were St. Andrew and his brother St. Peter, who both left their nets and followed our Lord. However, St. John’s Gospel gives us more detail about St. Andrew’s call. He tells us that St. Andrew was a devoted disciple of John the Baptist, but he began to follow Jesus when John the Baptist declared to him “Behold the Lamb of God!” as Jesus walked past. Andrew then leaves John, stays with Jesus, and becomes so convicted of the truth, that he goes and tells his brother Peter that he has indeed found the Messiah. St. Andrew preaches the Gospel for the first time. Furthermore, he is the first disciple to confess Jesus Christ’s identity as the promised Savior from Holy Scripture.

St. Andrew is commended for being the ‘First-Called’ because he had carefully prepared for the coming Messiah. As a disciple of John the Baptist, he partook of his baptism for repentance of sins in the Jordan river. He listened and digested his teachings regarding the coming Savior and the coming Kingdom of God. He was a man serious about God and his faith. Like his forefather Abraham, Andrew believed God and trusted the prophet’s words that God was going to redeem Israel soon. If Andrew were likened to one of Jesus Christ’s parables, he would correspond well with the five wise virgins who prepared for the coming bridegroom by trimming their lamps with oil beforehand. The five foolish virgins did not prepare for the bridegroom’s impending arrival. When the bridegroom arrived unexpectedly in the night, the wise virgins were ready to enter into the feast and the foolish ones ran to buy oil.  Their fate was to be locked out of the wedding feast.

St. Andrew is ‘First-Called’, not because he was impetuous and got lucky concerning the Savior of all mankind, but he is ‘First-Called’ because he, like the wise virgins, had prepared for the bridegroom’s coming. So when Jesus abruptly and unexpectedly arrived in St. Andrew’s life – he recognized Jesus for who he was – Israel’s Messiah, the Savior of the World. He believed the testimony of the last prophet, St. John the Baptist, concerning Christ and chose the better portion by following after Him. Isaiah testifies, “Seek ye the LORD while he may be found, call ye upon him while he is near,” Andrew embodies the wisdom of the righteous man who acts upon his faith in obedience. St. Paul says to the Church in 1 Thessalonians 5, “Therefore let us not sleep, as others do, but let us watch and be sober.” We can imitate Andrew by sitting at the feet of the Church as she prepares us for Christ’s second coming. A watchman who sleeps or is distracted is of no use to a city. Christ calls us to be ready to receive Him when He returns. There is an urgency that comes with the good news of the Gospel. What if Andrew decided to wait an extra day or even an hour before seeking out the Lord? It would have been too late. Today is the day of salvation.

However, let us not think that St. Andrew was able to prepare for Jesus Christ’s first Advent in and of himself. God moved first in St. Andrew’s life that gave him the eyes to see and the ears to hear the truth. The collect for Andrew’s day begins with, “ALMIGHTY God, who didst give such grace unto thy holy Apostle Saint Andrew, that he readily obeyed the calling of thy Son Jesus Christ” The Book of Common Prayer Book teaches us that it was by God that St. Andrew was able and prepared to perceive who Jesus was and follow after him obediently. The collect further directs us to pray that God would give us this same grace so that we too can answer Jesus Christ’s call to become his disciple.

So we follow Christ’s call with Saint Andrew to what end? We follow his call to the end that his reign spreads through all the earth through the proclamation of his Holy Word, that salvation is preached to the nations in his name. Jesus tells the Apostles at the end of St. Matthew’s Gospel, All power is given unto me in heaven and in earth. Go ye therefore, and teach all nations, baptizing them in the name of the Father, and of the Son, and of the Holy Ghost: teaching them to observe all things whatsoever I have commanded you: and, lo, I am with you alway, even unto the end of the world. Amen. This simple charter summarizes the entire Christian message of salvation. And standing behind this summary of the Church’s mission is the faithful and abiding love of God. God reveals his love for unworthy and wicked sinners in the Incarnation. He reveals his love in Christ’s miracles. He reveals his love in the Cross and Passion. He reveals his love in the glorious resurrection. Almighty God exhibits his love for mankind in every aspect of the life and work of Jesus Christ. The call for which St. Andrew prepared and, by God’s grace, answered, was the call to recognize and respond rightly to the Lord Jesus. Do not let another Advent pass you by without taking the opportunity to use it for your spiritual edification. Advent is a season of repentance and fasting as we look towards the final rest that only Jesus can give to believers.

As we reflect on the Incarnation of our Lord this Advent, let us, in the words of the parable, not neglect the opportunity to keep our lamps well trimmed with oil.

Join us on November 30 to celebrate the Feast of St. Andrew and to pray that we would all keep a holy Advent.